A web portal offers nonprofits the ability to post their projects and solicit crowdfunding. When donors make donations on the portal, the transaction information is stored. Therefore, the web portal maintains the following datasets:

Our charter was to develop a recommender system that will compare a donor’s previous donation history to the characteristics of the nonprofit projects soliciting funding and recommend the projects that best match the donor’s preferences. For example, If ‘Donor A’ had donated to a ‘Project X’ in the past, we could then find projects most similar to ‘Project X’ and recommend them for donations to ‘Donor A’. We can use ‘Donor A’s donation history to analyse his donation preferences. For better understanding, see Figure 1. 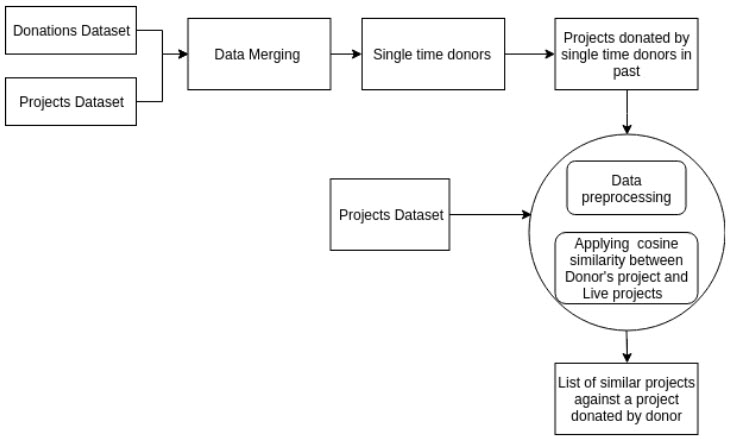 The sample dataset below describes the donation transactions. A donor donated “x” amount of money to a project (needing “project cost”) belonging to a “project category”.

This can be done by using one of the distance measures to find distance between project vectors. Project Vector consists of variables: ‘Project Category’ and ‘Project Cost’. Project Category is a categorical variable that needs to be mapped/converted to numeric values in order to use cosine similarity measure.

There are two popular methods to convert the categorical data to numeric values :

Table 3 is created by applying the Dummies Method to the “Project Category” feature in Table 2. Table 3 has three new columns ‘Education’, ‘Literacy’, and ‘Music’, as shown in the table below. 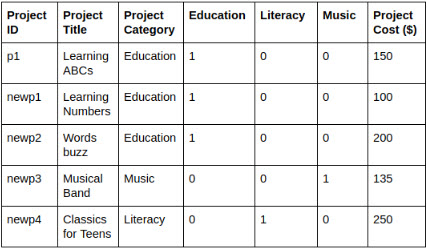 Our aim is to determine which of the projects in Table 2 are most similar to project p1 that was funded by donor D1. So, using the information in Table 1, we enter project p1’s data in Table 3.

Now, using the Cosine similarity method let us find the projects similar to the one to which donor D1 has made a donation (p1).

Now, from Table 3, find the similarity between p1 and each of the other projects. So, consider projects p1, newp1, newp2, newp3 and newp4:

While coding, similarity can be determined by using method cosine_similarity() from sklearn module. The similarity values are close to 1. The projects most similar to project p1 are newp2 and newp1. These projects can thus be recommended to donor D1.

This mathematical model’s ability to handle non-numeric differences through categorical variables and its ability to scale to a large number of attributes makes it extremely useful in recommender systems.

In the meantime, if you are looking for Cloud Services – ONAP, OpenStack, Kubernetes, Cloud Native Application, DevSecOps and Infrastructure Modernization please contact us.